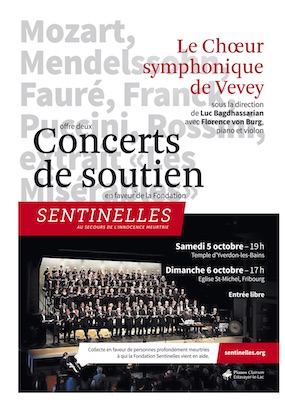 The Vevey Symphony Choir, under the direction of Luc Bagdhassarian, gives us the honor and the pleasure to perform at two concerts to support us in our action. Do not miss !

The fight of Sentinelles against the noma

Two students from Eracom (Lausanne) questioned by the noma

For their master’s thesis, Marie-Lou and Hervé, two (former) students wanted to film the work of Sentinelles in favor of the child victims of noma.

Shot in Burkina Faso, they filmed in particular Marietta, a child whose very survival was threatened. Greeted at the Ouagadougou Reception Center, they accompanied her until she returned to her family. They also followed two other girls who came to Switzerland for surgery.

This film, “A visage découvert”, was premiered in September. Hervé and Marie-Lou wishing to show it in festivals, it is not yet accessible to the public. The video above, lasting 5 minutes, is an extract.

Take a tour of Burkina Faso in the footsteps of Marietta, and see how the work of Sentinelles offers the victims of the noma the prospects for a smiling future.

New videos of the Sentinelles action

New videos have been created to present the action of Sentinelles in different countries: Burkina Faso, Niger, Democratic Republic of Congo, Senegal and Colombia. You can see all of them under Multimedia (in French). Below, the one that concerns Burkina Faso: